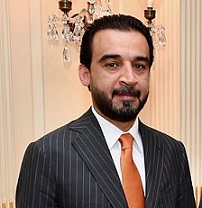 Mohammed Rikan Hadeed al-Halbousi (Arabic: ظ…ط­ظ…ط¯ ط±ظٹظƒط§ظ† ط­ط¯ظٹط¯ ط§ظ„ط­ظ„ط¨ظˆط³ظٹâ€ژ; born January 4, 1981) is an Iraqi politician who is currently the Speaker of the Council of Representatives of Iraq since 15 September 2018. He was previously the governor of Al Anbar Governorate since 29 August 2017. He is a member of the Al-Hal alliance.

Al Halbousi won a seat in the Iraqi 2014 parliamentary elections and has been serving an MP ever since. On August 29, 2017, the Anbar Provincial Council voted by a majority vote to elect Halbusi Al Anbar governor.

Al Halbusi holds a degree in Highways and Roads Engineering from Al-Mustansiriya University in Baghdad. He received a BSc. Degree in summer 2002, a year before Iraq war that was waged on March 20, 2003. Al Halbusi moved on to pursue his graduate studies at Al-Mustansiriya University where he received a master's degree in Highways and Roads Engineering in 2006. His MSc. thesis subject title was "Modeling of Pedestrian-Vehicle Conflict on Arterial Street Using the Simulation Approach".

Al Halbousi launched his own private business working as a business person. He has been owning and running Al-Hadeed Co. Ltd. for general Rebuilding projects. Al-Hadeed Company has implemented a number of infrastructure projects in Fallujah city with particular mention to the designing and implementation of the Fallujah sewage matrix. Al Halbousi remained active in his private business until he was tapped to get into the world of Iraqi politics in 2014.